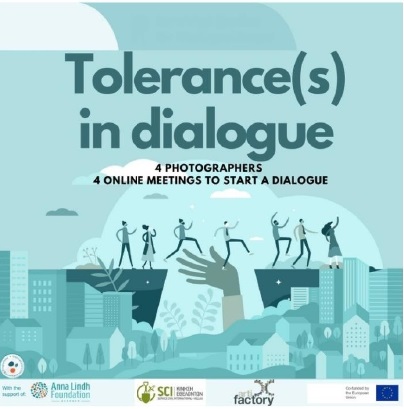 SCI Hellas and Artifactory invites the civil society, photography enthusiasts, but also everyone interested in combatting stereotyping and intolerance, in increasing awareness of the diverse cultures and intercultural competences and behaviours to participate in four(4) online meetings-discussions of the project “Tolerance (s) in Dialogue” which will take place in November and December 2021.

“Tolerance(s) in Dialogue” seeks to support the involvement of young people, women, migrants and refugees and artists for the promotion ofintercultural relations and to support artistic production for social cohesion and intercultural interaction. The project is implemented with the sympraxis ofthe two organisations and the participation of photographers Elena Efeoglou, SotiTyrologou, Stefanos Chronis and Socrates Baltagiannis in the framework of the“Civil Society action for Intercultural Cities and Learning” programme of theAnna Lindh Foundation co-funded by the European Union.

With human in the focus of concerns for a sustainable development without exclusions the 4 online meetings of “Tolerance (s) in Dialogue” invite the 4 photographers to present their work and open dialogue with the audience. Throught heir work the photography artists put themselves in the frontline of the discussion for the promotion of diversity, inclusion, social cohesion and sustainable development with the Greek and European audience.

The meetings-discussions will take place on zoom, they are open to everyone who is interested in participating and are as follows:

21 November, 18:00 – 20:30: Elena Efeoglou presenting “MUTE” The work MUTE comments on the identity of the woman, her roles and emotions under the full body scarf. “I believe that art can promote social consciousness and be the link between reasoning, critical thinking and behavior formation. Contemporary art offers a field of political and social interactions and can contribute to the general awareness of the public towards social issues.” declares the artist.

28 November, 18:00 – 20:30: Soti Tyrologou presenting “Through the eyes of the other”  SotiTyrologou says about her work “Through the eyes of the other”: “About a year ago, during the intercultural photography workshop “Postcards from Home”, I met Serife, Matta and Shayan. Our photography engagement gave us the opportunity to develop a relationship of mutual understanding and acceptance and helped me understand the effect of this interaction on my perspective. The three of themfound themselves in Greece under different circumstances, nevertheless, they seemed to be connected by a common cord that was tying their separate storiesto their new place of residence. The thread. This photographic work explores diversity, culture and tradition through the element of dress, in a globalized society. It is an ongoing project since the pandemic that broke out separated us somewhat abruptly.”

In addition, November 28 is celebrated as the Day of the Mediterranean in the EU, aiming that the whole Mediterranean community and all those identifying with the Mediterranean celebrate the constant heritage of this ancient cultural market of dialogue, wisdom and humanity. That same day was chosen by the Anna Lindh Foundation to present the results of the programme “Intercultural cities and learning” and all related activities in which “Tolerance (s) in Dialogue” is included.

5 December, 18:00 – 20:30: Stefanos Chronis presenting “Unknown Prayer in Athens”  Stefanos Chronis photographs places of worship in Athens: “The “Unknown prayer” project aims at visualizing the existence and presence of immigrants in urban space through their places of worship. Every person at these photos is an immigrant or a refugee. Their places of worship in urban Athens, some of themhalf-hidden, are underground or abandoned warehouses, an old orthodox temple,an old small theater but also outdoor public spaces, squares and courtyards.”

12 December, 18:00 – 20:30: Socrates Baltagiannis presenting “In Limbo”  With his work“In Limbo” Socrates Baltagiannis refers to the that in-between space where childrenborn and raised in Greece but being refused the Greek citizenship have to livein. “They have been born or finished school in Greece. They talk, they think,they even dream in Greek. However, this group lives in limbo, deprived of Greekcitizens’ rights. These are about 200,000 children and young adults, born andraised in Greece from immigrant parents, whom the Greek state refuses torecognize as its own. By not having a Greek citizenship, these children aresimply considered immigrants in their own country.

The meetings willtake place from 18:00 to 20:30 on the dates above and are open to anyoneinterested.

Submit your interest toparticipate here or at communication@sci.gr

SCI is an independent international sociopolitical organization working to defend human rights through international volunteering cooperation and solidarity projects aimed at establishing a culture of peace.