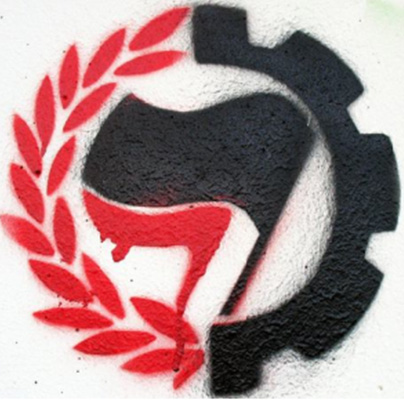 This is a project aimed at focusing on propaganda pre and post WW2 and the concept of ‘the enemy’, from National and ethnic groups to political opponents and social groups. The importance of understanding propaganda has always and will remain one of the most important aspects to both fighting fascism and reactionary policies that seek to distract from failures of good governance and perpetuate polices of discrimination and racism. If we understand the information that is being told to us we have better chance at challenging or changing policies and laws that maintain a status quo of ‘us and them’.

We live in a diverse society of many opinions, backgrounds and cultures, this is what makes a society stronger, safer and more equal rather then one of division and separation. This strategy only serves to control society through fear, coercion and violence which we at SCI Hellas actively oppose through our goals and actions as a peace organization. We believe that one of the strategies to tackle fascism and the far right is to understand how they speak, what methods they use to manipulate individuals fears and emotional responses to issues that may seem out of their control.

This project joins groups and SCI branches across Europe to build a collective understanding and strategy of how to tackle propaganda and the far right that has exploded across the world in the last decade. With the increase in the reach of social media and new forms of media, the far right has adapted its strategies to distribute their propaganda through these new media platforms and political parties. We hope that this project can bring better strategies in understanding the importance of historical propaganda and the similarities with current far right and fascist movements.

Remembrance weeks are set as follows:

8 events have been carried out within this project:

Event 1- Preparatory Meeting
Participation: The event involved 15 participants from partner organizations, including 6 participants from Rome (Italy), 1 from Turin (Italy), 1 from Athens (Greece), 1 from Wien (Austria), 1 from Barcelona (Spain), 1 from Sofia (Bulgaria), 1 from Poznań (Poland), 1 from Budapest (Hungary), 1 from Lille (France), 1 from Bonn (Germany).
Location / Dates: The event took place in Rome, (Italy), from 10/12/2019 to 16/12/2019.
Short description: The aim of the event was to agree on the management, set up the activities, discuss the visibility and dissemination.

Event 3 – Remembrance Week in Italy
Participation: The event involved 25 citizens, including 1 Participant from Poznań (Poland), 1 from Barcelona (Spain), 1 from Madrid (Spain), 3 from Turin (Italy), 1 from Wien (Austria), 1 from Colonia (Germany), 1 from Sofia (Bulgaria), 1 from Paris (France), 1 from Lisbon (Portugal), 1 from Athens (Greece), 13 from Rome (Italy),
Location / Dates: The event took place in Rome, Italy, from 14/06/2021 to 23/06/2021
Short description: The aim of the event was to deepen the research about propaganda during totalitarian regimes and in current media, analyzing specifically the topics of youth participation in regimes and anti-regimes movements and freedom of speech.

Our Remembrance week at SCI Hellas focuses on the topics of ‘fear’ and ‘normalization’, as the refugee and migrant crisis came following a decade of economic hardship post crisis in Greece. This situation making the rise of Golden Dawn into the Greek Parliament and political mainstream all the more important in understanding and fighting fascist ideologies and the conditions within a society that create the space for them to exist and to thrive.”

Particularly in Greece, we dwelled on:

accompanied by activities and the use of non-formal education/training methods.

Mado Baboula is our communication officer and the local coordinator of the project.

Yota Arvaniti is the office coordinator of SCI-Hellas.

Martina Burdisso is our Remembrance Messenger.

Georgia Simossi is our historian and facilitator.

For more information on the project please visit www.chaptermedia.eu

SCI is an independent international sociopolitical organization working to defend human rights through international volunteering cooperation and solidarity projects aimed at establishing a culture of peace.